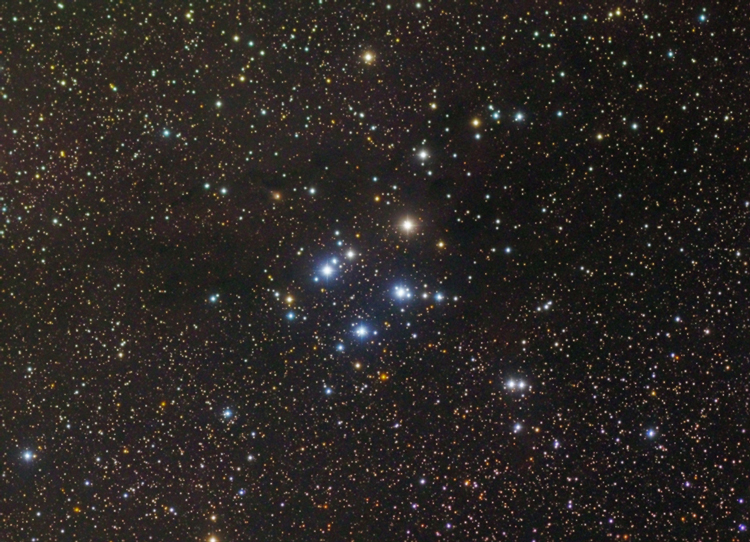 This is an open cluster which is detached with a weak concentration toward the center, has a large brightness range and is poorly populated (less than 50 stars). It is involded with or contains nebulosity.

This small and compact cluster is very easy to spot. In the 35mm Nagler it jumps out at you as a starcluster, well detached from its background, but with no obvious centre. The optimum magnification is 72x with a field of view of 68'. The first thing I noticed when looking at Stock 23 is the trapezium of stars that looks very much like the keystone asterism in M 13. The trapezium is oriented northeast-soutwest. It is made up of three white stars and one yellowish star, which is at the northeast corner. On the opposite of this bright yellow star, on the soutthwest corner of the keystone, lies very nice double star, Struve 362.

Beside the keystone, I see a V-shaped asterism to the southwest, ending in Struve 362, and a few other triangles and chains of stars. In the centre there is no central star, but a vast empty space. There are less than 50 stars in the cluster, so it's a poor open cluster. The range of brightness is large, from very bright to very dim stars. I cannot detect any nebulosity or background glow of unresolved stars. Beside the yellow stars I mentioned earlier, I cannot detect any other stars with an obvious colour.
This cluster has been more or less "anonymous" until the late 1970's when John Pazmino wrote about it in the Sky and Telescope. Since then it is sometimes called Pazmino's cluster. As Walter Scott Housten writes, it is strange that this bright and obvious cluster is not included in the Messier, NGC or IC catalogue. The bright, deep yellow star (Hipparcos 15217) in the northern part of the cluster is an 8th magnitude K0 giant. The 9th magnitude yellowisch star (HD 237104) in the eastern part of the cluster a F6 main sequence star.